In 1930, three sons of a newspaper editor decided that publishing wasn’t for them. Instead, the Demeules brothers founded Standard Iron in a former Minneapolis, MN, saloon, fabricating products for the building-construction industry. A fourth brother later joined the team, which, after World War II expanded into supplying farm-implement manufacturers. The 1960s saw the addition of a contract manufacturing division and more expansion followed. Today, Standard Iron & Wire Works, Inc., on its third generation of Demeules family leadership and with 500 employees, is headquartered in Monticello, MN, and boasts two other Minnesota locations, Sauk Centre and Alexandria, as well as facilities in Grand Island, NE, Thomson, GA, and Monterrey, Mexico.

Capabilities across company locations include stamping, fabricating—laser cutting, CNC punching, press brake forming, tube bending and welding—machining, assembly and finishing. Add to all of that a staff of design, applications and tooling engineers. Ten Amada laser cutting machines populate Standard Iron & Wire Works facilities, including three at Sauk Centre, five at Grand Island, one in Thomson and one in Monterrey, with a Messer plasma cutting machine in Alexandria. Material sent for cutting runs the gamut, including mild and stainless steels as well as aluminum in a variety of thicknesses.

Ensuring run time and material utilization on these multiple-locale machines demands efficient nesting, For that, in early 2021, the company opted for ProNest CAD/CAM part-nesting software from the Hypertherm Associates Software Group to replace previous software that management and programmers found lacking. The manufacturer currently employs the nesting software on its stable of laser cutting machines as well as the plasma unit.

Among the long list of ProNest positives identified by Andy Toop, Standard Iron & Wire Works manufacturing engineer: a simplified learning curve along with ease of programming and operation; integration of the software with the company’s enterprise resource planning (ERP) system for work-order scheduling and plate inventory; increasing material utilization via automated nesting; and the ability to run ProNest across all brands of machines—a huge flexibility advantage, according to Toop. 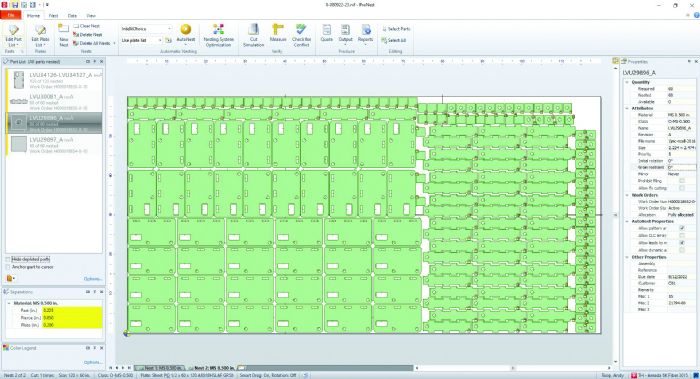 “It’s ease of use really stands out,” Toop says, recalling his prior work experience working with ProNest that led to its pre-purchase trial at Standard Iron & Wire Works. “Fabricators always are trying to minimize programming time, and with just a little knowledge of how laser cutting works, they can program nesting.”

Standard Iron & Wire Works, described by Jason Michalski, sales manager for Hypertherm Associates, as a power user of the nesting software—part of the 10 percent of users who use 90 percent of its features—squeezes plenty out of ProNest to reduce significantly the programming time for nesting while employing various features to reduce material usage and smartly select proper sheet sizes for the jobs.

“I prepared a PowerPoint presentation to sell management on this software,” Toop recalls, “and by the third bullet point, we had the go ahead to buy it.”


The Latest in Cold Saws, Ironworkers and Hydraulic Presses

What proved so persuasive in those bullet points? Here’s an example: One PowerPoint slide on part-nesting capability showed a nest of 187 parts on a first-attempt ProNest-programmed sheets as compared to 178 parts via the previous software, resulting in saving one full sheet ($320) on a job. And, ProNest required 1 min. of programming for this job as compared to 30 min. for the old software. Another: For estimating, with the feed rates, workcenter rates and material costs integrated into ProNest, the software creates 99-percent-accurate laser-operation prices. And, estimators can use PDF and DXF files to create quotes, with the software’s AutoNest module enabling one-click identification of the optimal sheet size in inventory for that particular part, and creating an accurate quote in about 1 min. depending on part complexity.

Today, with ProNest in place and running on laser cutting machines across multiple locations, Toop and laser cutting operators, programmers and estimators make use of various software features to save money and time, including these key modules:

Besides the benefits brought by the nesting software to Standard Iron & Wire Works identified above by Toop, he has another.

“We have what we call T jobs—internal jobs such as parts for fixtures and check gauges,” Toop says. “Suppose a fixture requires 10 separate parts. With our prior nesting software, we would tab all of those parts (separate CAD files) together and bring them into the nesting software as a single part, a couple-hour process. Now with ProNest and its tabbing capabilities, we can nest a T job in 5 min. That time savings is important for us. With this and other nesting-software capabilities, our programmers nest only 2 to 3 hr./day, whereas when I started they were nesting 10 hr./day.”

“Trying to replace people who’ve programmed for 20 years or more as they retire is becoming more and more difficult,” offers Toop. “Since we brought in ProNest, we’ve put together work instructions for nesting. Combined with the software’s ease of use, we have put people who have never nested on a computer, given them the work instructions, and said, ‘Nest these work orders.’ They can do it!”

Ease of use helps, too, with filling in across the manufacturer’s various locations when a programmer is out sick or on vacation.

“Just recently,” Toop says, “we had programmers in two locations who were out. I was able to sit here and nest for all of these plant locations. With the old nesting software, we didn’t have the ability to program efficiently across locations.”

With ProNest in place, Standard Iron & Wire Works has set about consolidating its sheet sizes. “With this nesting software, we have such improved utilization that we almost never want to use a smaller sheet,” Toop says. “Pro-Nest does such an excellent job with dynamic nesting that we try to use bigger sheets, which cuts down on table changes. We’ve been eliminating smaller sheets where we can, except on our turret punch presses, which have smaller tables that require the smaller sheets.

“We’ve seen huge material savings since bringing in the new nesting software,” he continues. “It allows for tighter nesting due to the solid algorithms as well as features such as collision detection and avoidance, and common-line cutting. And, we're pumping out a lot more product now just because we we're saving on table changes. We're placing so many more parts on a sheet that even with our automation—cranes and automated stack loading—we're having to bring extra people to unload the sheets. We’re cutting so much more so quickly now.”

Sheet-size consolidation is one of a few initiatives undertaken by the manufacturer resulting from the new nesting software.

For example, the ability to customize ProNest led to additional projects courtesy of Standard Iron & Wire Works’ IT team, led by Dan Welter. This includes classification of parts to better track what’s needed and when.

“Due to an uncontrolled process, we had been cutting more parts than needed, destined for press brakes,” Toop recalls. “We would add parts to a sheet because we had room on that sheet, and ended up throwing them away because we already had too many of those parts. Now, thanks to Dan’s work, we developed part classes based on their value and demand. We can check to see what parts are needed, and their value, and then determine if we want to cut more of those parts to fill a sheet. Now we only run extra parts as they’re needed, because we know what we have on hand. For example, if we know that a part is a service part, we only need 10 of those. No need to run extra because they have nowhere to go.”

Other custom software additions include the ability to filter for specific material at specific plant locations and filter for expected feed rates for jobs, as well as generate customized reports. And, ProNest allows the ability to better save jobs and reports, as the old software only saved to a set amount and after that would begin overwriting, according to Toop.

“ProNest really opened the door to some of our skeletons, or issues that we should address to save time and/or money, and increase productivity,” Toop says. “We didn't realize that by purchasing new nesting software that we would open up so many doors, but we did.” MF 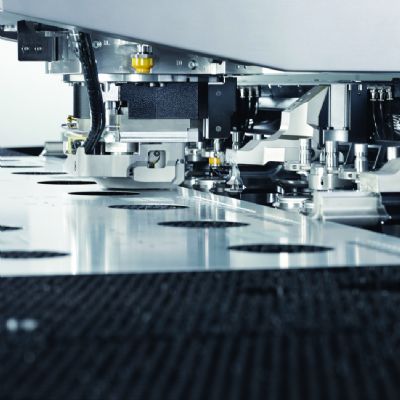 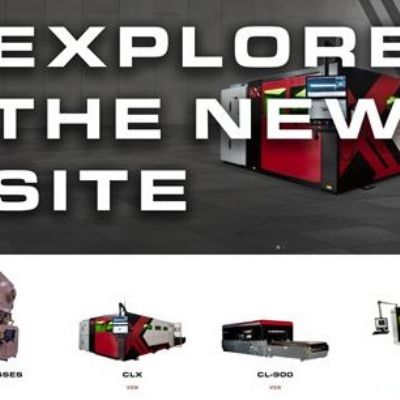 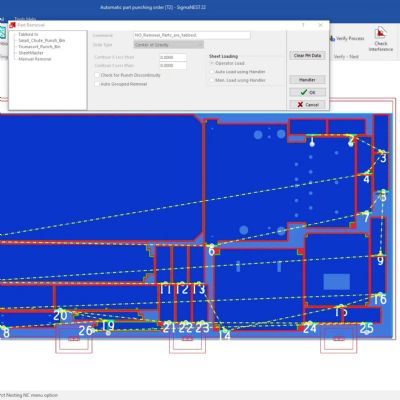 
The Latest in Cold Saws, Ironworkers and Hydraulic Presses