Conrex Steel Ltd., with facilities in Etobicoke and Kingston, Ontario, Canada, recently collected the bounty of a collaborative project to procure a 3500-ton hydraulic press. The project, part of Canada’s Advanced Manufacturing Supercluster, was conducted in partnership with Concord, Ontario-based press manufacturer Macrodyne Technologies Inc., and Brampton, Ontario-based material-handling-equipment manufacturer Source Industrial Services Inc. It resulted from a grant from NGen, the not-for-profit organization that runs the Advanced Manufacturing Supercluster, with a mandate “to grow manufacturing capabilities in Canada through the development and adoption of advanced manufacturing technologies and processes.” 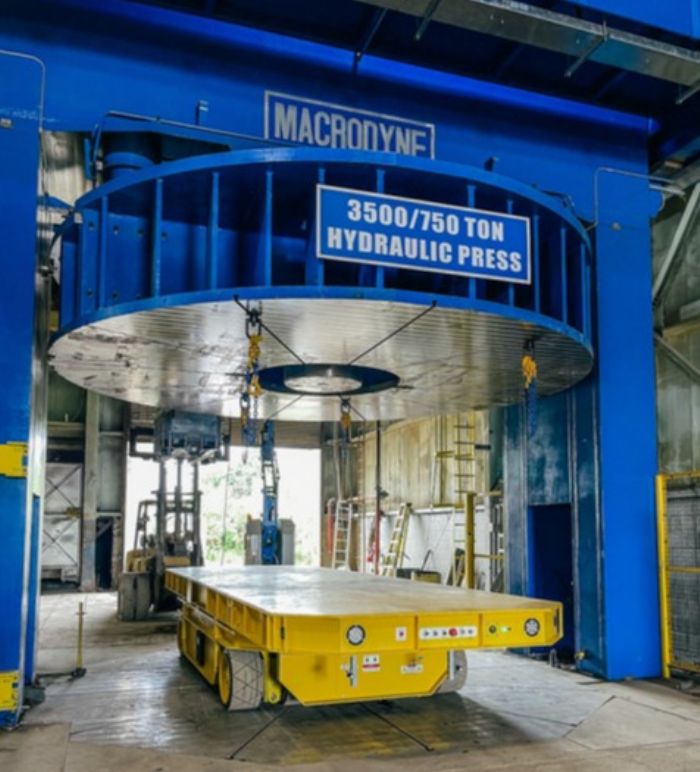 Clearly, after speaking with Larry Harrison, Conrex president, that’s precisely what the new press brings to the firm, more than doubling its previous press-tonnage capacity and enabling it to form thick plate sections and heads, work it had to no-quote in the past.

“In talking to our top 25 customers, it became clear that we needed a press that could process thicker material and also allow us to reduce a two- or three-step forming steps into one setup,” Harrison says, “flanging for example in addition to forming, to take time out of the process and allow us to become more competitive. The new Macrodyne press has increased our capacity and our capabilities, and made us more efficient.”

The project, which kicked off with NGen late in 2019, received a curveball from the COVID-19 pandemic. “Just as subcontractors were scheduled to start digging the pit for the new press,” Harrison recalls, “we decided to not allow them in the building, to keep our employees safe. So, we decided to build the pit ourselves—no simple task, since we’re steelworkers, not press-bed specialists.”

The Conrex team excavated the 22 by 29-ft. pit, as deep as 18 ft. in places, built the forms and poured the concrete, welded rebar, etc., and while that work was underway Macrodyne went to work fabricating the press. “Since Macrodyne is nearby,” says Harrison, “we avoided the extra process of building and trying out the press at Macrodyne. Instead, they shipped the press components directly to us and assembled the press at our facility, saving a big step and associated cost in the build process.”

Conrex Steel specializes in the fabrication of conventional tank heads, including segmented heads of welded segments, from alloy and low-alloy steels, stainless-clad and SA516 Grade 70 carbon steel. It manufactures segmented tank heads, servicing a variety of industries including oil and gas, hydrogen, cryogenics, and nuclear. It operates from two facilities—a 60,000-sq.-ft. shop in Etobicoke, Ontario (where the new Macrodyne press resides), focused on hot-forming heads larger than 84-in. dia.; and a second 40,000-sq.-ft. shop in Kingston, Ontario, for manufacture of heads 84-in. dia. and smaller, primarily for small propane tanks, as well as some stainless-steel heads for the food and beverage industry and medical applications. The Kingston facility also manufactures joggled heads, with the end of the flange offset to ease fitup to the tank shell. In addition, Conrex also manufactures large spheres, again from welded segments, in an orange-peel or soccer-ball design. 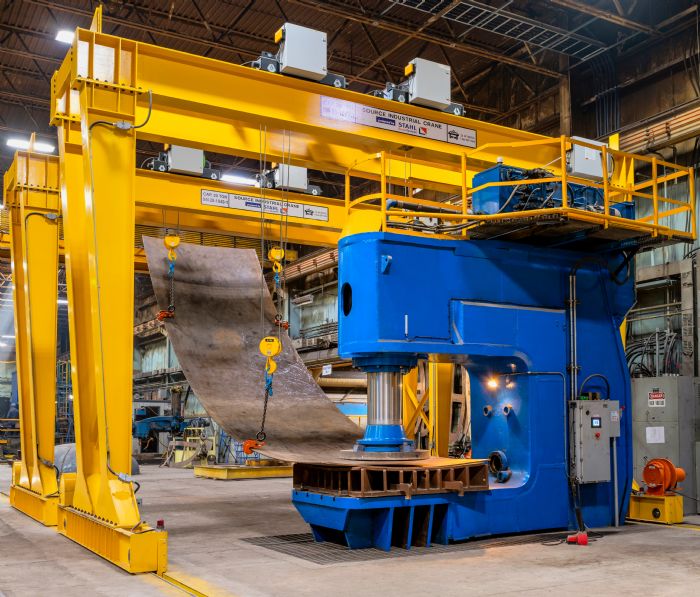 “Hot forming a head in the new press, as well as in our existing modified 1500-ton press,” Harrison explains, “we heat the circular steel blank in one of our furnaces to about 1670 F, which can take as long as 6 hr. depending on steel thickness, and then move it over to the press and into the die to form it through a ring. We have 3 min. to complete the forming process. Formed sections then move to one of our two robotic-cutting rooms for edge-beveling, trimming and hole cutting using either the plasma or oxyfuel process.”

The third partner in the NGen grant (a total of $8 million between the three partners), Source Industrial Services Inc., provided state-of-the-art gantry cranes positioned on both sides of Conrex’s repurposed C-press to manipulate the huge and heavy steel blanks for forming sphere components. “The cranes are controlled in synch with the press-ram motion,” Harrison notes, “indexing the material left and right and front and back in tiny increments as the ram forms the steel. It’s a one-person operation, while most other shops would require two or three people to handle the same process. 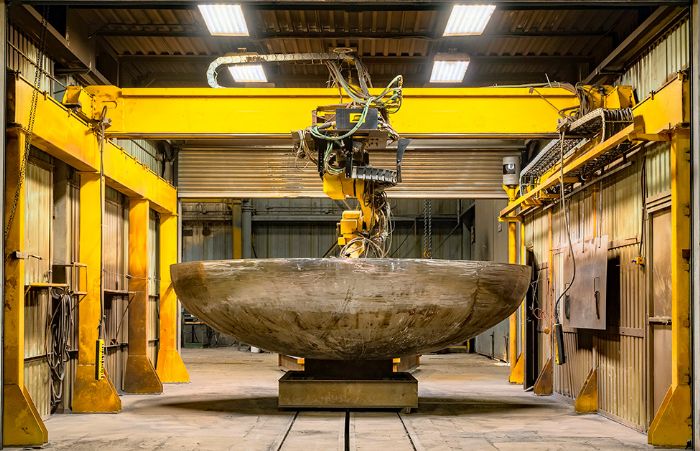 “One of the goals of the Advanced Manufacturing Supercluster is to help companies compete globally,” Harrison adds, “by improving efficiency, and the automated crane motion certainly helps with that. In addition, Source Industrial helped us source an electronic, solar-powered, hydraulically driven transfer cart (120,000-lb. load capacity) that we use to move steel around the facility and dies in and out of the press. It has proven to be a very cost-effective way to increase our material-handling capacity without adding huge cranes to the facility.”

At press time, Conrex was wrapping up testing all 15 dies it built for the new press, some weighing as much as 50,000 lb., designed for different shapes of heads (hemispherical and semi-hemispherical) and plate thickness. It built the dies inhouse, while working with local machine shops for fine-tuned specially hardened components.

“We designed the dies to handle the 15 most common sizes of larger, thicker heads that we’ve been no-quoting for the last several years,” Harrison says, “missed opportunities that we’ll now be able to win, again meeting the objectives of the Advanced Manufacturing Supercluster to elevate our ability to compete, push new possibilities for the industrial use of Canadian steel, strengthen Canadian supplier networks and showcase unique Canadian IP and manufacturing capabilities in press and crane technologies.”

Finally, Conrex also engaged with the academic team at Toronto’s George Brown College to help develop the intellectual property to assist in forming the larger parts. Its goal then will be to store the results from the data analysis in the press control for use on repeat, similar jobs.

On the IP IoT Front

…the consortium also has engaged manufacturing-software provider Panevo, in collaboration with Accuenergy, a manufacturer of energy-measurement instruments, to pilot a new lean/overall equipment effectiveness (OEE) software platform to the new press. Developed with support from NGen, the software platform, called ioTorq, supports data collection and interpretation to bring Internet of Things capabilities to Conrex Steel. Sensors will collect critical data from the press and provide real-time metrics to the Conrex team, including OEE. The data will help identify opportunities to improve efficiency and productivity and reduce waste.

“Lastly, the project includes development of an optical head-mounted display (think Google Glass),” says Harrison, “which will provide live data back to Macrodyne technicians to help with press diagnostics and maintenance.” MF


Macrodyne Signs a License Agreement with AEM to Commercializ... 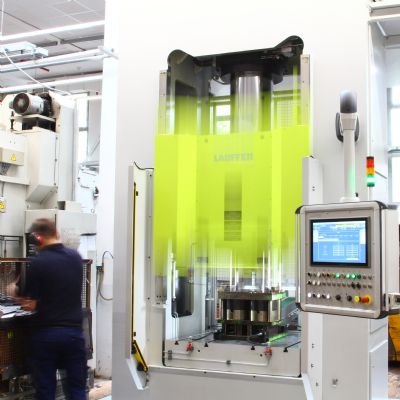