In Stratford, Ontario, Canada, Omex Manufacturing ULC produces components for automotive Tier Ones and OEMs worldwide. Output includes automotive drivetrain, seating and body-in-white components. To maintain its lofty position in the rough-and-tumble auto-supply world, the company, which became a subsidiary of Michigan-based Wico Metal Products in 2021, has focused on automation, expertise in a variety of processes and investment in state-of-the art equipment. 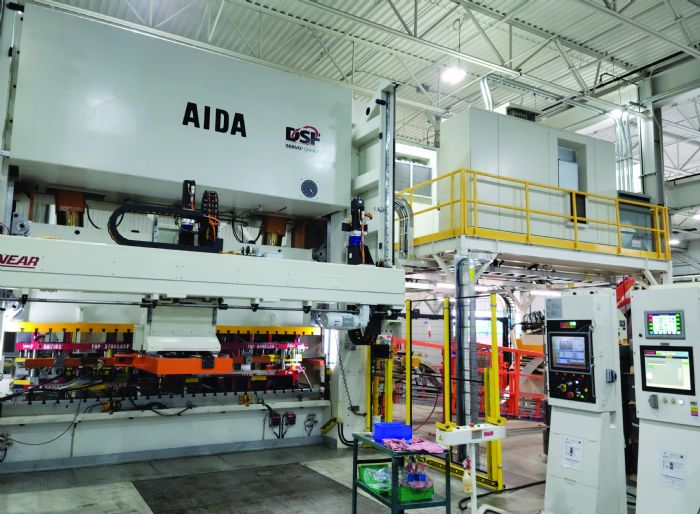 Founded as a family-run business in Kitchener, Ontario, Omex initially stamped residential plumbing and construction parts before branching out into automotive and gas-grill burner components, which prodded the company to up its press sizes into the 400-ton range. Over time, automotive took over, and today Omex specializes in several manufacturing processes, including progressive-die and transfer stamping, arc and projection welding, thread rolling and automated assembly. 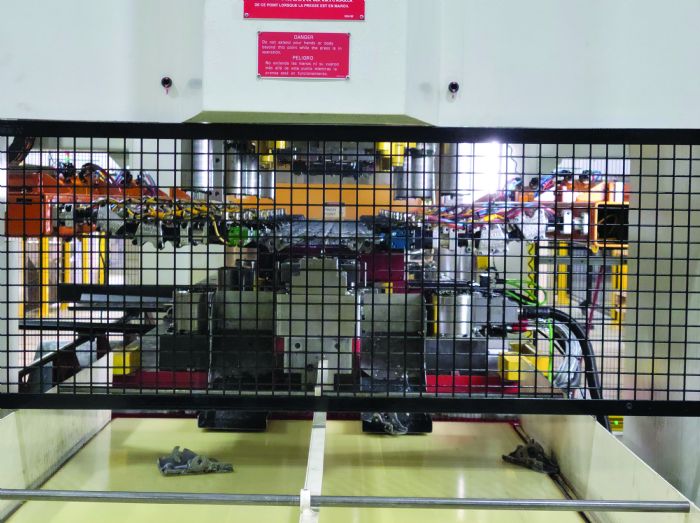 In 2006, Omex moved into its current 100,000-sq.-ft. facility, a former foundry. The move enabled the company to thoroughly consider and design the space around its stamping core competency. Today, press row at Omex, with underground scrap conveyance along the entire length as well as a centralized lubrication system (underlying the company’s commitment to recycling and sustainability), houses seven machines—all straightsides save for one gap-frame press—from 160 to 630 tons.

“When designing this facility prior to move-in, we had straightside mechanical presses to 400 tons, but included a pit for a 600-ton press, because we knew we’d need greater tonnage,” recalls Justin Slawek, Omex plant manager, who toured the operation with MetalForming. “Originally, we planned to fill the pit with another mechanical straightside, but when we landed the second generation of a stamped-spindle seating component, we knew that only a 600-ton-range servomechanical press would have the force and capability needed to produce it at the speed we needed. And, we are a forward-looking company, not shy about adopting the latest technology.” 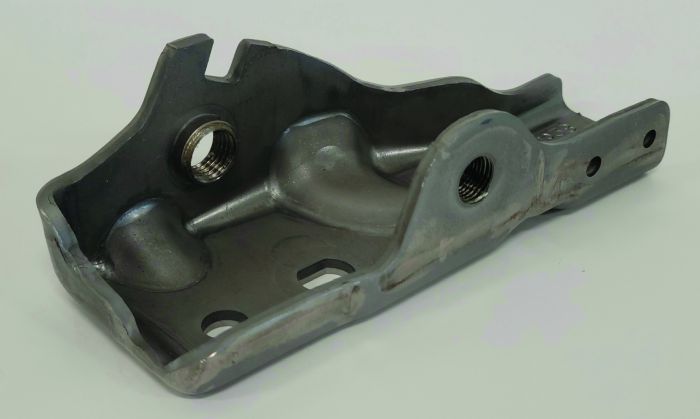 In 2016, Omex bought its first servomechanical press, a 630-ton direct-drive DSF-M2 model from Aida America with 144-in. bed, along with a rear transfer system from Wayne Trail and an inhouse-developed bar feeder, to produce that spindle part. (See video.) The servo press’s longer stroke allowed more time for the transfer automation to do its work, as well as the ability to create an optimized motion profile for the part. Omex also increased production speed by taking advantage of the press’s infinitely programmable stroke and velocity profiles. 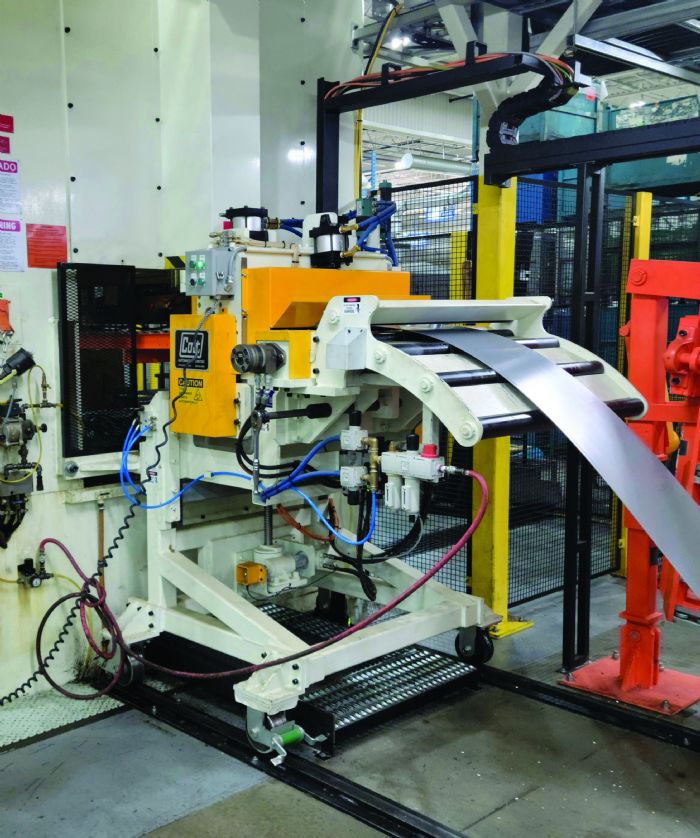 Omex incorporated three speed segments into the servo-flex motion profile to produce the spindle: one optimized for the transfer, one optimized for the forming portion of the stroke and one set at maximum press speed to open the die more rapidly. The result: Omex improved part quality, increased production speed by more than 20 percent and reduced scrap rate by 1.5 percent. And, improved part-to-part dimensional capability on this press led to fewer process adjustments, with an increase in tool life of 15 percent as well as longer intervals between die maintenance.

“We had run the first generation for this spindle part at 16 strokes/min. on our 400-ton mechanical straightside,” Slawek recalls. “Our engineering manager and I, in converting part production to the servomechanical press, began playing with slide velocities. One benefit of the servomechanical: It offers unlimited energy, especially at exceedingly slow slide velocities. We ran design experiments at different forming velocities checking if dimensional stability improved, didn’t improve or stayed the same, and what happens if we hit harder or softer. For this part we ended up finding a sweet spot.”

The three speed segments mentioned above reflected the need to slow velocities for transfer movement, increase dwell time to ensure sensor readings and optimize for forming.

“We did this before we even got into the details of pendulum motion,” Slawek says. “Overall, we increased production from 16 to 20 strokes/min. with the servomechanical press over the mechanical.” 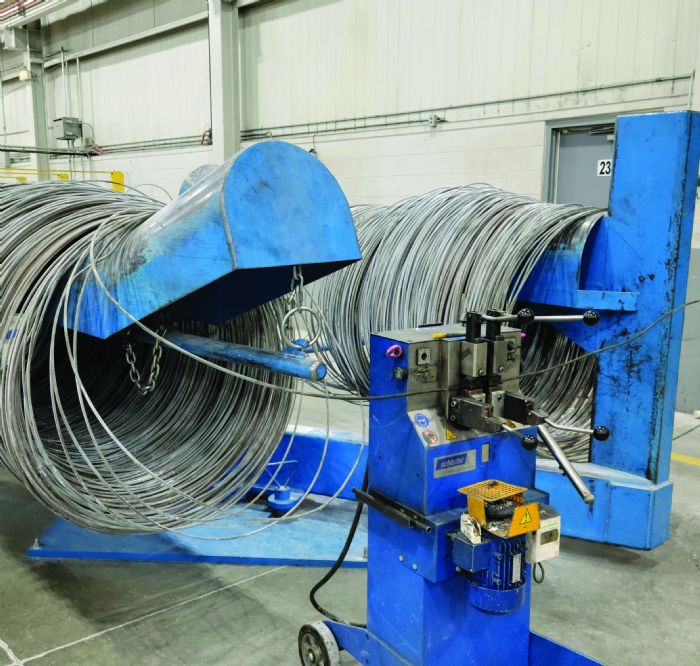 Pleased with its initial foray into servomechanical press technology, in 2021 Omex purchased another 630-ton DSF-M2, identical to the first save for a longer 168-in. bed. Omex teamed this press with a transfer from Linear Automation. At the same time, the company decided to outfit both servomechanicals with coil-feed systems from Colt Automation, designed for feeding high-strength steel and boasting four-over-five roller configurations for powered straightening. With two servomechanicals inhouse, Omex has discovered all manner of advantages this technology offers.

“We are fine-tuning our servo presses, especially in pendulum mode,” Slawek offers. “For example, we’ve just finished trialing an automotive-part program that previously ran at 25 strokes/min. We monitored the energy when forming at that rate, and by using pendulum motion to significantly cut back the dead (nonforming) cycle, we easily reached 40 strokes/min. Tool life remains the same, but output increases.

“Of course, this brings new challenges,” he continues, “such as dealing with quicker bin filling due to the increased output. With this logistics issue, we had to slow down a bit, rearrange resources and rethink how we remove these parts from the press.”
Press-stroke control inherent in servo-driven presses also comes in handy for stamping lighter-gauge material, “which tends to dance,” says Slawek. “Now we can lift softly, so that when the stripper or lifter plate raises, it does not stop abruptly and cause the strip to bounce.”

“Everyone focuses on slide velocity and energy, which are important, but stopping time also is critical,” he says. “Compared to our traditional mechanical presses, stopping time on our two servomechanical presses is significantly quicker. Traditionally, we would try to finish our material feeding at top dead center in case something was out of position in the press. Now, as these presses stop more or less instantaneously, we can have material feed and use an extra 30 or 40 deg. of timing to speed up the stroke.”

Fine-tunability of these servomechanical presses, notes Slawek, also allows for better matching with movement of auxiliary equipment such as a transfer and servo-driven tapping unit, delivering greater accuracy.

Bringing in servomechanical presses did require a learning curve, acknowledges Slawek, but that has smoothed out, “and we’re very comfortable quoting jobs because we have inhouse expertise that knows how to get the most out of this technology,” he says. “At first, we almost quoted as a traditional stamping job and then had to learn the process. Now, given a tool design, we are confident in quoting based on how we can adjust and calculate the energy and motion.”

One challenging takeover job calling for Omex’s servo press capabilities: a seatbelt housing from 3.5-mm-thick 480-MPa high-strength steel. Another stamper had stamped and extruded, then tapped—one hole Imperial, a second hole metric—via a secondary process. Omex, in its 630-ton servomechanical press and with assistance from Aida to set up the process, coil-feeds a two-out die that forms the part and extrudes on vertical sides, then punches four tab holes on the horizontal. A servo-tapping unit then taps the two extruded holes. Integrated part transfer and the plug-in servo tapping operate off of press power and controls. Fully sensored, this job produces 50,000 parts/ week.

Touring Omex, it comes as no surprise that the company has quickly caught on and squeezed the most from its servomechanical presses. Inhouse engineering expertise is on display throughout the plant, including a straightener/feeder on the 2016 servomechanical press line that rests on a track for simple movement away from the press for manual part handling and transfer setup. Press beds also have been inhouse-engineered with press-bed grooves matched to die-block grooves and blocks to quickly and accurately place tooling.

Another inhouse win: continuous feeding of raw wire courtesy of custom wire-welding stations. The wire travels through draw lines to produce blanks that then feed rollforming lines to produce fully or partially threaded rods, which eventually are stamped and assembled into seating and drivetrain components. There’s more, including robotic welding cells customized for part loading and unloading without interrupting production and featuring a centralized fume-exhaust system. And, a wealth of inhouse-automated assembly equipment populates the plant floor.

These innovations grow out of an Omex philosophy to hire engineering talent and place a premium on shop-floor experience.
“Much of our management team not only has engineering degrees, but also started out on the shop floor,” Slawek says. “This experience and knowhow, along with encouragement for feedback from the plant floor—operators and technicians are on the front line and know the issues—result in a positive culture at Omex that drives innovation.” MF 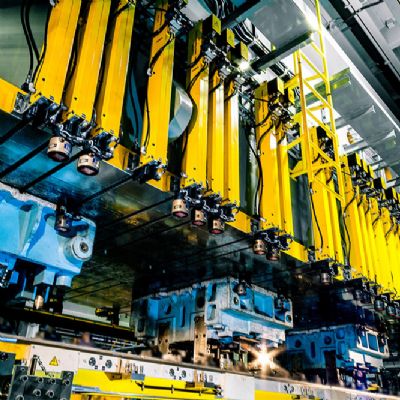 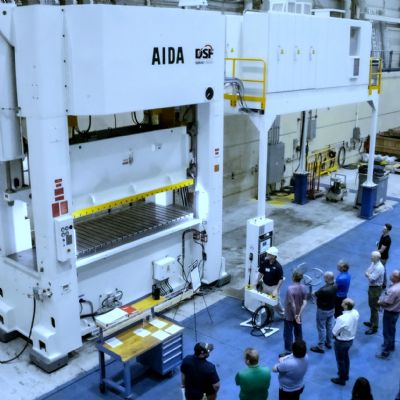 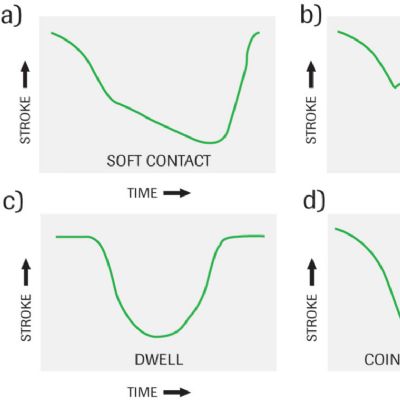 
Improving Drawability with a Servo Press